I'm kinda bummed. After videoing my Tiger Rump for an hour molting (very cool by the way) I thought he had something go wrong with his molt on his pedipalps. As time went on and the more I could see and saw the little claw's on his front legs...... I realized he was indeed a boy that will no longer live to see another year. The poor thing. I thought he was still a young spider. SURPRISE! I was thinking about finding a female but I don't think I want to take on that endevor. Does anyone need a male to breed with their female? I have read to wait a couple months after the molt though. I wanted to tell someone how cool it was to watch and see him molt into a mature male and how sad it is that he is not long for this world. I haven't even had him a year myself. His body is only about an inch and a half. Anyway, this is the only place that will understand my sadness about knowing he only has a few more months, close to a year if he's real real lucky, to live. Everyone else in my family and at work thinks I am a loon!! Which I am, don't get me wrong..

I have to catch the wolf spiders at work and put them outside before someone steps on them! on purpose!!!!

"What you do speaks so loud, I can't hear what you say."

i know not the same but sometimes it will do

I hope I die old, fat and sassy maybe after getting lucky.

Seriously though, isn't it amazing how we get attached to "just a snake" or "just a spider?" They are amazing animals. Get some good photos and know that he had the best of care. You might be surprised that he lives longer than you'd think. Captive-bred spiders often defy the rule book; I guess they didn't read it. 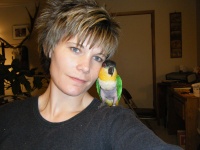 Thanks guys. Of course I would be freaking out if it was one of my snakes. I need to find him a girl friend but I don't know anyone who breeds them. Maybe in a few month I will have Larry send an email out. Unless they are close by and can use him soon and give him back to me for the rest of his poor little life.

By tiger rump do you mean C. fasciatum? If it is, then you may be in luck. I just recently acquired one C. fasciatum that's pretty large. The tiger rumps are dwarfs by the way so if anything, mine is at least a juvie. Either way, it hasn't molted in my care yet but when it does I'll sex it then let you know the results 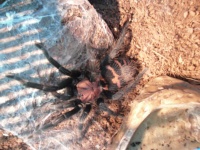 I don't know all the scientific names but I was told it was a Costa Rican Tiger Rump and he looks just like your picture. I hope yours molts withing the next few months or it might be to late to breed them. Are you in the hobby of breeding? I'm not so I would not want half of the eggs. Maybe just 5 or 10 to see if I could keep one alive.

Yea then that's a C. fasciatum. I haven't bred any Ts yet, but I AM very much in the hobby. I have 14 of them

but if we do end up breeding, I don't have any need for a ton of slings but would of course keep a few

Ya, I read about taking care of the possible hundreds of them and decided to pass myself. Maybe someone else would want some to. I'm not in it for money.

Well, it still hasn't molted yet, but it's been in it's hide for about a month now. Hopefully any day now it will surprise me with a large exuvium.

Similar topics
» Tiger melon
» How to tell when my tiger melon is ripe?
» Awwwwww! Cute Baby Pictures!
» What have I done in the workshop today?
» Plants for small space gardening

Do you feed your snakes: